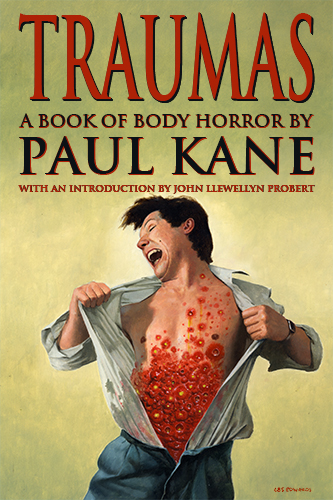 A man suffering from extreme grief finds that pieces of himself are going missing, while another attempts to cheat death in a very unusual and dangerous way… One woman gets more than she bargained for during her pregnancy, while another is the target for a unique killer who must feast to survive… And as one prisoner attempts to escape not only his pursuers but this reality, an unhinged individual attempts to build the perfect family bit by bit…

In this collection of thirteen tales from award-winning and #1 bestselling author Paul Kane, you’ll find every conceivable kind of Body Horror. This very special book also contains Kane’s first published story ‘Façades’, a novelette set in his PL Kane crime universe featuring a brand new PI, the scripts for the theatre version of The Torturer (recently turned into a short film starring current Pinhead Paul T. Taylor) and the comic adaptation of The Disease, plus it comes with an introduction by John Llewellyn Probert (The Compleat Valentine) and stunning cover art by Les Edwards. Get ready to be traumatised!

Paul Kane is an award-winning, bestselling writer and editor based in Derbyshire, UK. His short story collections include Alone (In the Dark), Touching the Flame, FunnyBones, Peripheral Visions, Shadow Writer, The Adventures of Dalton Quayle, The Butterfly Man and Other Stories, The Spaces Between, Ghosts, the British Fantasy Award-nominated Monsters, Shadow Casting, Nailbiters and Death. His novellas include The Lazarus Condition, RED and Pain Cages. He is the author of such novels as Of Darkness and Light, The Gemini Factor and the bestselling Arrowhead trilogy, a post-apocalyptic reworking of the Robin Hood mythology. His latest novels are Lunar (which is set to be turned into a feature film), Sleeper(s) (a modern, horror version of Sleeping Beauty), the short Y.A. novel The Rainbow Man (as P.B. Kane), the sequel to RED – Blood RED – the critically-acclaimed and award-winning Sherlock Holmes and the Servants of Hell and Before.