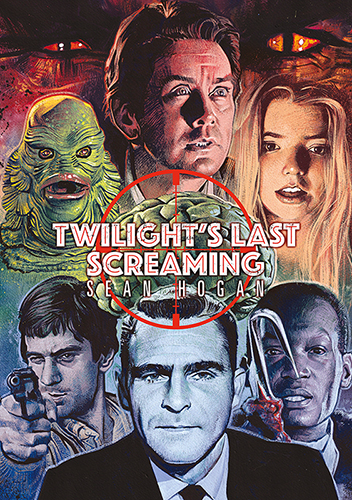 PATHS CROSS
What is the relationship between Senator Greg Stillson and murderous preacher Harry Powell?
How did sweet Alice Spages meet Roman and Minnie Castavet?
What happens when Laura Mars gets into Travis Bickle’s taxi?

STORIES ENTWINE
What links Michael Myers to the strange town of Twin Peaks?
How is Clint Eastwood’s nameless Stranger connected to ‘Dirty’ Harry Callaghan?
What Paranormal Activity goes on in the shadows of Hill House?

In the follow-up to his acclaimed England’s Screaming, Sean Hogan acts as your guide through the liminal spaces of North American horror, down Nightmare Alleys and across High Plains, following the Lost Highway all the way to the Bates Motel. At once fiction and criticism, Twilight’s Last Screaming masterfully examines how our experience of cinema takes on an imaginative life of its own. It deconstructs and reassembles genre film into unfamiliar but recognisable shapes, mapping the history of the American horror movie and, ultimately, the dark heart of America itself.

Sean Hogan is an award-nominated writer and filmmaker based in the UK. He has published several books of cinema metafiction, including England’s Screaming (named as one of the five best genre novels of the year by The Financial Times), Three Mothers, One Father, a monograph on Gary Sherman’s Death Line, and the forthcoming That Fatal Shore.
His feature film credits include the critically-acclaimed The Devil’s Business, The Borderlands, and the documentary Future Shock! The Story of 2000AD. In addition, he has written several other produced screenplays, and also co-created the anthology plays The Hallowe’en Sessions and its follow-up, The Ghost Train Doesn’t Stop Here Anymore, directing both their London runs. He is currently developing a number of new film and television projects.