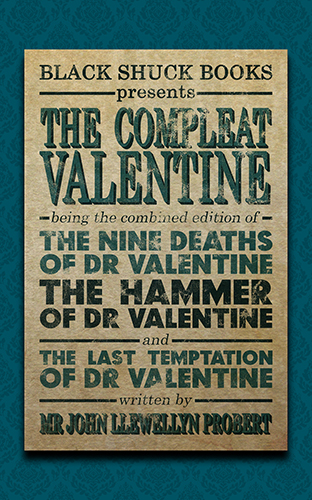 The city of Bristol is rocked by a series of horrific murders, each more gruesome and outrageous than the last, and all in the style of horror films starring Vincent Price.

The journalists who wrote about the case begin to die horribly, this time in the style of Hammer horror movies.

A Hollywood film company has arrived in Bristol to make a movie about the murders. Nicolas Cage is planned to star, and the screenplay bears little resemblance to what actually happened.

And someone isn’t happy about any of that. Someone who plans to use some of the most creative death scenes in classic British horror films to show these modern
film-makers just what a terrible mistake they have made.

The world’s most resourceful and flamboyant maniac returns…

John Llewellyn Probert has been watching British-made horror films since he was ten years old, when he saw Dr Phibes Rises Again (1972) and Witchfinder General (1968) on a Vincent Price season on ATV. He was probably a bit too young for that second film, but the first influenced him to an extent that is still being felt by readers to this day, and especially readers of a book like this.
He is the recipient of the British Fantasy Award (for The Nine Deaths of Dr Valentine) and the Children of the Night Award (for The Faculty of Terror). His latest novel is The Lovecraft Squad: All Hallows Horror (Pegasus Books), his latest short story collection is Made for the Dark (Black Shuck Books) and his latest non-fiction book is a monograph on his favourite film of all time, Theatre of Blood (PS Publishing). There are lots of others and you can read more about them at www.johnlprobert.com