Only the Broken Remain 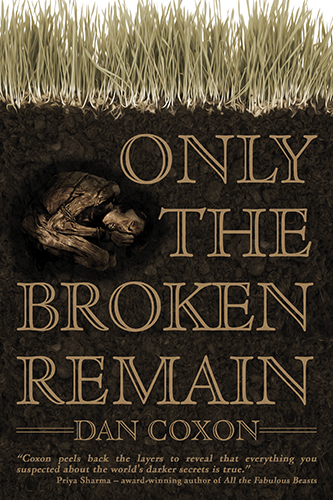 I could see into the room well enough, but there was nothing there. No furniture, no ornaments. A rusted sink streaked with black and grey. An empty light fitting. Nothing more than a thick layer of dust on tired linoleum, forming a furred carpet that stretched undisturbed into the empty room beyond… There was no neighbour. It occurred to me for the first time that I might be going mad.

A young man joins a circus where the mysterious ringmaster is more interested in watching him fail. An immigrant worker forms an unlikely alliance with his housing estate’s foxes. A fraudulent accountant goes on the run, but loses herself in the dry heat of Australia.

This debut collection from Dan Coxon unearths the no man’s land between dreams and nightmares, a place where the strange is constantly threatening to seep through into our everyday reality. Populated by the lost and the downtrodden, the forgotten and the estranged, these stories follow in the tradition of Thomas Ligotti, Robert Aickman and Joel Lane. Because when the dust has settled and the blood has been washed away, Only the Broken Remain.

“Dan Coxon’s subtle, delightfully dark tales creep up on you from the shadows, then refuse to let you go. I devoured these stories about crises of identity and reality being undermined after glimpsing something inexplicable from the corner of your eye.”
—Tim Major, author of Snakeskins and Hope Island

“Coxon writes stories filled with surreal, precise menace. Only the Broken Remain gripped me throughout.”
—Aliya Whiteley, author of The Beauty and The Loosening Skin

Dan Coxon is a Shirley Jackson Award- and British Fantasy Award-nominated editor and author based in London. His stories have previously appeared in Black Static, Nightscript, Unsung Stories, Not One of Us, Unthology and The Lonely Crowd, as well as in the anthologies Nox Pareidolia, Humanagerie and Shallow Creek. His non-fiction has appeared in The Guardian and Salon. He edited the multi-award-nominated folk-horror anthology This Dreaming Isle, as well as the critically acclaimed journal of weird fiction The Shadow Booth. A micro-collection of his short fiction, Green Fingers, was published by Black Shuck Books in April 2020.