Diseases of the Teeth 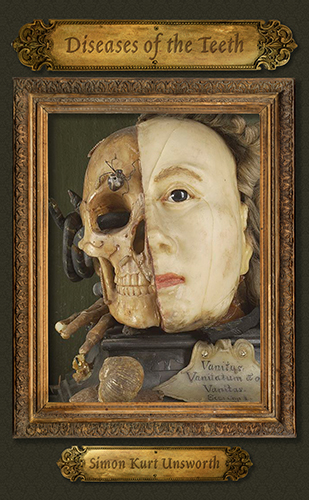 An extreme fear of teeth, occurring in two distinct forms: the more common presentation is a fear of the teeth of others, leading sufferers to try to reduce exposure by means of minimised social contact, avoidance of watching television, films or reading magazines and, in more serious cases, the removal or destruction in situ of people’s teeth.

The rarer form if this condition is auto-odontophobia, a fear of one’s own teeth. Without treatment, sufferers deteriorate to the point where they pull or cut their own teeth out using hammers, pliers, kitchen knives or other household tools. Incidents are also on record of sufferers chewing pebbles or other hard items to shatter their teeth into pieces to get them out of their mouths.

Simon Kurt Unsworth is a World Fantasy Award nominee and the author of three previous collections: Lost Places (Ash-Tree Press, 2010), Quiet Houses (a This is Horror shortlisted collection, Dark Continents, 2011) and Strange Gateways (PS Publishing, 2014). In addition, his short stories have featured in multiple editions of Black Static, the Terror Tales series and Best New Horror. His debut novel, The Devil’s Detective was released in 2015, with its sequel, The Devil’s Evidence released the following year.